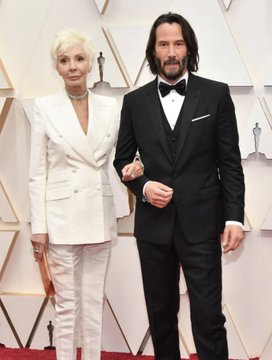 Just like every year, Oscars 2020 was one epic night that culminated with many buzzy moments. The biggest award night continued last year’s host-less trend. Despite that, 2020 Academy Awards were loaded with a lot of drama and fun moments. Here’s everything that we loved about Oscars 2020.

#1 Keanu Reeves brought his mother to Oscars and everyone confused her as his girlfriend.

Keanu Reeves brings his mom to the Oscars, and people thought it was his girlfriend. Mom, left. Girlfriend, right. pic.twitter.com/kqfuc2OVpo

#2 Seventeen years after his Oscar win, Eminem performed on Lose Yourself and fans went berserk.

Eminem performing ‘lose yourself’ at the #Oscars the Celebs in the audience trying to rap along got me laughing 😂😂😂pic.twitter.com/CQ70a28XmU

#3 Martin Scorsese seemingly fell asleep during Eminem’s performance and his expressions became a fodder for memes.

#6 Tom Hanks dropped and did push-ups with a U.S. Army Sergeant on the red carpet.

Taika Waititi putting his oscar under the chair is a mood. #Oscars
🎥 Brie Larson via Instagram Story. pic.twitter.com/rpC5tVOVfT

#8 Natalie Portman took a sly dig at the Oscars by wearing a cape that had last names of eight women directors snubbed at the award ceremony.

natalie portman embroidered her dior dress with the names of the female directors that weren’t recognized for their hard work omg we love women supporting women #oscars pic.twitter.com/3xZCgR4ppF

#9 Rebel Wilson and James Corden presented the awards decked out in head to toe cats costumes.

My coworker sat behind the Parasite cast/crew at the Oscars. This was their reaction to winning best picture & being the first foreign language film to win it. #Oscar2020 pic.twitter.com/5JcbzFWWkp

#11 Brad Pitt won his first acting Oscars and got a hug from co-star Leonardo DiCaprio.

#12 Indian-American rapper Utkarsh Ambudkar made waves with his awesome performance.

“Keep an open mind, I’m sure we’ll find there’s plenty of light here for us all to shine”- Utkarsh Ambudkar
Performance of the #oscars so far? pic.twitter.com/8nfQJvJS5i

#13 Elton John’s performance on Love Me Again got the whole room grooving.

#14 Joaquin Phoenix’s gave the most rambling but heartfelt speech on his Best Actor Oscar win.

#15 Bong Joon-Ho promised to drink all night until next morning after big win.

“I will drink until the next morning.”
Bong Joon Ho is a big time member of the #ZillionBeers movement. What a night! #Parasite #Oscars pic.twitter.com/ChbnowpePc

“I’m ready to drink tonight,” he said as he left the stage.

What Age Is Right for boy and girl to start Dating?

Dating & Relationship Concept Everyone Should Be Aware Of This Year